Find out more about Lotro Draigoch 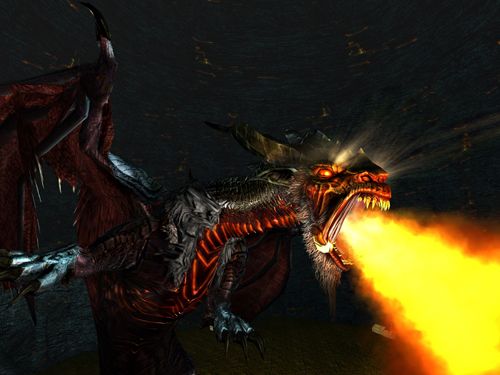 The latest Dev Diary describes the largest creature in the Lord of the Rings Online - known as Draigoch, the new boss in the Rise of Isengard 12/24 raid. Unlike the other creatures, Draigoch is really powerful and players will need to attack the separate parts of Draigoch’s body in order to defeat him.

How to build your Dragon

When we set out to make this encounter, one thing stood out as crucial: we wanted to make an encounter with a massive creature. We wanted to impart the feeling that players were interacting with a creature that couldn’t be approached in the same way that they approached smaller creatures, like those they faced on landscape. We always thought it was a little funny that no matter how big or small the enemy, the same approach of stabbing it in the toe was enough to keep its attention. (Not to mention the fact that any tank could simply take the hits of this massive creature when in “real life ” it ought to just pick you up and throw you.. or eat you.. or … you catch my drift.)

So we set out to make an encounter with a large creature that you needed to approach somewhat differently.

You know what we remember about dragons from all of those pen and paper RPG’s? They have an insane number of abilities, that’s what! They can bite you, breathe on you, smack you, bash you, stomp on you, whip you, oh and did we mention they can fly? The list goes on. Plus, let’s not forget the whole, “I am a magical creature with magical spells to rival that silly magic-user in your group,” thing. Dragons are really powerful; and that power goes well beyond a collection of statistics listed in some manual.

Draigoch won’t be employing magic spells and the like, but he will be using all of his limbs to attack. Players will need to attack the separate portions of Draigoch’s body in order to take him down. Only by putting Draigoch into this vulnerable state will players be able to ultimately defeat him.

Okay, there is indeed plenty of drama (read: “fluff ”) to be had throughout this encounter. Draigoch, like certain other dragons featured in Tolkien’s works, has plenty to say! Dragons are intelligent creatures and have egos to rival their great size. Draigoch has some great moments of monologue and a healthy dose of smack talking to boot!

Draigoch is also quite the visual experience. Expect to be blown away by all the work the art team has done to deliver what amounts to a “Summer Blockbuster” of raid encounters. We definitely encourage everyone to see this encounter.

Normally when designing raids we’d go straight to 12 players as our intended raid size. But we wanted to try and do something a little different with Draigoch.

Our intention is that Draigoch be fairly easy for a larger group and more difficult for a smaller group. For those brave souls willing to forego the extra players, the reward will be that much greater. And, hey, since there are less players to share with, you’ll be receiving even more rewards.
As always, there will be a challenge mode for Draigoch and it will only be available on the Tier 2 difficulty.

Like any good dragon Draigoch’s age, Draigoch has collected quite a treasure hoard through the ages. Many adventurers have come to challenge Draigoch for his wealth or simply for the fame of besting him, but all have failed.

There will, of course, be a standard allotment of equipment that will only be available from defeating Draigoch. Plus, those who brave his flame will find exclusive access to the head and shoulder pieces of our next class armor set.

This entry was posted in news and tagged Dev Diary, Draigoch, Rise of Isengard. Bookmark the permalink.