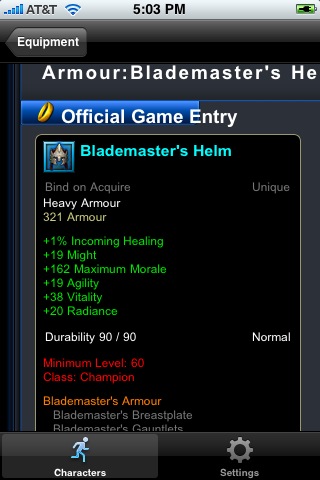 Few days ago we have received an email from Barry Martin. Barry is a developer who works on iPhone apps in his free time. As a big Lotro fan he has decided to make iPhone Apps related to the game. So far Barry has finished coding two Lotro iPhone Apps and his wife did graphic design and creation.

The first one, "LOTRO Server Status", has been already approved by Apple as a first LOTRO app in the Appstore. LOTRO Server Status is a Lord of the Rings Online game server status checker for your iPhone or iPod touch.  This version only supports North American servers. If there is interest, European servers may be added in a future release. This application is available on the AppStore at itunes.apple.com. More information you can find on Barry's web site bamsoft.net

The second one, "LOTRO Characters" has been submitted to Apple and is awaiting approval. This application pulls data from my.lotro.com using the recently released beta developer API to show character info/gear on your iPhone. Sneak peak screenshots you can find at bamsoft.net