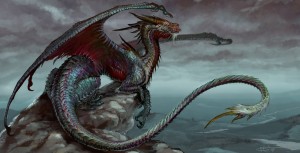 Draigoh is a new boss raid that will make its appearance in the Rise of Isengard expansion. If you want to try this raid out in beta there is a guide written by lotro.com forum member Azahran, member of the Meneldor PvMP guild. We are not sure if the skills and the mechanics of the fight will change after the expansions launches or in some of the subsequent patches, but for now this is the most exhaustive guide out there, with video for various character roles and all that jazz.

What each Class needs

Jewellery that works with their Armour to get their Offense Rating as high as it can go, and then morale over 9k before buffs.

Burglar: Stack Agility for Melee Offense and then Morale/Vit to get to the standard

Captains: Stack Might for Melee Offense and Heal rating, then try to get 14k Buffed(Since Capts can always be buffed Aim for over 14k buffed)

Champions: Stack Might for Melee offense and Physical Mitigation(Common Damage) then morale to get to the standard

Guardian: Stack VITALITY, Get as much Vit as you can at any cost. Your morale needs to be over 12-13k unbuffed which shouldn't be hard to get at all.

Hunter: Stack hard into Agility, Get your ranged offense to the new 50%(Rumoured to be 60%) cap and then go for Morale, if your only at 8.5k unbuffed that's fine(though it really is not hard to hit 9)

Loremaster: Stack Will and then Morale like the others. Side note, get a LI that makes your Fire Lore last for 1-Minute, this will be important.

Rune-keeper DPS: Stack Will get your offense rating up there, and then get your morale from your jewellery, 8.5kk is fine for RKs.

Rune-keeper Healing: Stack Will and get your healing rating up there, each raid must have 1 dedicated healing RK(No exceptions, Mini's cant handle it). This RK MUST BE DEDICATED TO HEALING. Youll need healing Stones and boagss.

Warden: Stack VIT and get your morale to over 12-13k before buffs. this is easy enough to do with the right jewellery and the new gear. Also find LIs that increase the rating of your avoidance Gambits, Wall of Steel and Dance of War, MAX THEM OUT.

Traits Per Class, Must all be at 12l

Guide for Tanks and Healers
Tanks, your job is to tank Draigoch's head, and call out which way he is going to move so your group and the DPS group can move accordingly. Watch the Following video(Don't report me for the 1 cuss word in it please) for a visual of what I'm going to explain next.


There are 4 Perches in the Draigoch fight, he will jump from one to the other seemingly randomly. You can however determine at the last second which way he is going to jump. To start the boss is in front of you and snapping at you and what not, If the boss jumps to the left then you run to the right. The reason for this(As you should be able to put together through the video guide) is that the boss goes left, then breaths fire setting sections of the cave on fire going from Left to Right or Right to left. So, he jumps left and starts breathing fire from Left-Right, You run to the next perch to the right and he'll meet you there soon.

Healing Guide for the Tank.

The job of both of these people is to heal the tank(So be where you can see him) but be far enough back that you can't see the boss's head. This is portrayed slightly in the tanking video but its simple enough to figure out, otherwise run where the Tank/Raid Leader says and keep healing.

Guide for DPSers and Raid Healers

Since I wasn't down in the DPS group I don't know everything about this part of the fight, but I still know a decent amount.

The boss does a distribute damage and so balling up is key. I believe that for any left paws(Called Right I think but left from player PoV) does the distributive damage. The Right(called left but again PoV if I remember correctly) has a fire puddle and just does AoEs, so you'll want ranged hitting that one from far away. You could decide to split the groups or you could keep all 9 people together and just take it slow, its up to you. Now, in Teir 1 24-Man only worry about the bottom 2 paws, meaning the running part is easy, See which way the Tank/Leader calls and go that way. For the Teir 2 12-Man then it gets a bit tougher. Take your time before you activate the boss to see how far you'd need to run each way to get back to the top 2 paws as they are the tricky ones and the challenge mode ones.

I BELIEVE that if the tank calls out run right, then turn right run up the ramp to the point where your at the tanks level and the door way your in will be door 0, Continue right(CounterClockWise) past door 1 and then run down door 2. This should rotate clockwise and take you back to the top to paws.

If the tank calls out left, its a bit trickier. Run down and left and continue going until your at bottom level, then continue left and find an up ramp that goes to the right(CounterClockWise). My advice on Teir 2 12-Man is to give people time to see which way they need to run, and then set 1 person with a target marking to let them lead the DPS group.

Regardless of Teir 1 or Teir 2, once 2/4 paws are dead the boss falls down into the middle of his gold pile, as far as I noticed he takes normal damage but some people say its only from CJs, some people say you need a CJ to break his armour, Whatever it is have burglars(Burglars are also useful for the paws for disable and reveal). When Draigoch falls down in his gold pile injured then 9/21 people run out and start hitting him. You'll have to see for yourself how the best way to damage him is, We only got that far in Beta once and it was only open for 1 night.
NOTE HOW I SAID 9/21 PEOPLE RUN OUT. The tanking group does not leave their top level and they just wait.
Whenever the boss starts jumping around that's your call to leave his gold pile, stay calm but move fast and together back to the bottom level, see where he jumps to via the tanks call and then repeat the steps above.

Random other facts that I forgot to put in

Cave-In Skill from Draigoch: This happens when his head doesn't have a target that it can reach or no target at all. This is why its important for the tank to get to his perches as fast as possible and be ready, also why the tank doesn't jump down to DPS. This skill hits everyone in the entire raid for 800 common every 2 seconds until the problem is fixed.

Flaming Inferno: This is the fire breath skill from Draigoch(I just made the name up, but its obvious what I'm talking out) If the tanking group doesn't get away from Perch 1 and towards Perch 2 fast enough whenever he jumps then you get hit for 1,000 Fire every 2 until you leave the effect area of the hallway.

Improved Mini Rez: Whenever the boss jumps from one perch to the other(Atleast on Beta) we all broke combat and with the new Mini rez rezzing everyone that died should be no problem since the Tank group shouldn't die at all and the DPS group has no urgency to get from one platform to another.

Time Per Platform: Its 1-Minute per active head, so once his head is active he's there for 1 min then a 10-15s Animation, then 1m again, Etc Etc.

Time on Gold(Injured, Hittable, Etc Etc) I believe this is either 1 Minute or 2 Minutes, again only got to this phase once and it wasn't really that much of a learning process since no one knew what was going on. Time doesn't matter on this part, just watch for him jumping around and get off the gold.

Sorry for any typos that are probably in this, and yea PM me, or find me in game for any questions. Or in KoG of Meneldor's vent

This entry was posted in guide and tagged Draigoch, guide, Rise of Isengard. Bookmark the permalink.

6 Responses to Draigoch Guide and Video