Quests in Frostbluff's Winter-home are your main source of Frostbluff Coins, which you exchange for Yule Festival rewards (OK, you exchange the coins for tokens, which you exchange for rewards, but you get my point). Some of the quests can be done only once per day, but some are repeatable and can quickly accumulate the needed number of coins for that perfect house decoration. The quests usually reward 4 Frostbluff Coins with the exception of the eating contest which can reward you up to 13 coins if you manage to finish it whole. There is one quest that you spend 10 coins on, but, as you will see, you get a lot of good karma for it :).

The general theme of the whole festival is conflict between the poor and the rich and the quests follow this theme up 'till the very end. There is a hidden deed that you get once you complete 30 Winter-home quests. This opens up 2 new quests where you can do only one of the two. You get to choose whether you'll help the workers or the Mayor and the rewards for these quests are in line with the side you decided to support (shabby or extravagant). Here are the quests that will get you to this point:

An Invitation to the Festival

This is the starting quest you get in your mail. It just directs you to speak with special Yule Festival Stable Master located in all the major cities. These Stable Masters will take you to Frostbluff and Winter-home. Full walkthrough with screenshots is available in our quests database.

The Yule Celebration of Winter-home

This is the first quest you will get once you arrive to Frostbluff. This is a sort of an introductory quest that will take you to all the important people in town that you will be meeting in the future quests. Full walkthrough with screenshots is available in our quests database. 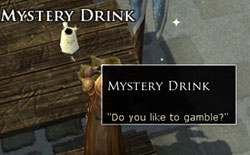 This chain of quests is in fact the most important event for all of you that are looking to make some coin and get some Yule rewards. The whole think begins at Ona Kay. She will tell you to wait for the eating contest to begin. She will shout before it begins. Don't worry about that. You are not on any timer while you have the very first part of this quest. Take your time. Let the competition hurry. You start eating once everyone is gone. IMPORTANT: only eat berries, mushrooms and eggs because these will give you the lowest speed decrease. Pies and bread will weigh you down considerably. There is also a very special mystery drink spawning every now and then. It either clears all of your existing speed decrease debuffs or it slows you down 60% for 20 seconds. I usually take my chances and drink it after I had 4 meals.

Once you are ready and have eaten all your first meals talk to Ona Kay and that is when the real race begins. You run downstairs to the second post. IMPORTANT: once you eat all 5 meals you need to talk to the guy standing next to the eating station to continue the questline. Upstairs is the third eating station. Well, you can click on the links above and see our screenshots from all the steps.

If you manage to complete all five steps you will in fact get 13 Frostbluff coins. You can repeat it as many times as you want and the contests are about 6 minutes apart.

Here's a video guide showing how to complete all five stages of the eating contest:

Having a grand party for almost a month requires a lot of drinks and the man in charge of keeping a fresh supply got carried away a bit too much in the festivities themselves. Your job is to go fetch a new Keg and carry it to the thirsty festival patrons. The trick is to avoid the guards scattered around town.Luckily, the guards move and you can sneak past them, all with a giant keg on your back. Full walkthrough with screenshots is available in our quests database.

Basil, the bloke that didn't deliver the kegs, is also in charge of tidying up after the Eating contest participants. Not a pretty task. He is willing to part with some coins if you do it instead of him. Personally, I hate this quest because I am sick of cleaning the dishes at home, but if that is your cup of tea go ahead and help lazy Basil. Full walkthrough with screenshots is available in our quests database.

The Mayor wants the best wood burning for the Festival patrons. The mayor thinks wood-trolls are wood. Guess who will be parting the wood-trolls from their best burnable parts? That is correct, you. There is a large number of level 10 wood trolls to the north-west of town. Full walkthrough with screenshots is available in our quests database.

Wood for fire is not the only thing that constantly needs replenishing. Food is rapidly being depleted with the eating contest being held and all. Hungry hobbits need their meals and you will be in charge of collecting the materials for them. You will be running around Frostbluff collecting mushrooms, berries and whatnot and you can see all the locations in our full walkthrough with screenshots. 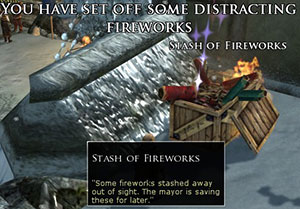 This is one of the quests that speaks of the separation between classes in this Festival town. If you are all for worker rights you will help by creating a distraction with fireworks and than proceed with pickpocketing the rich patrons that will be mesmerized by all the shiny lights and explosions. Fireworks might not be available right away, because some other person might have just started the quest. Just wait a bit and you will be able to start the fireworks and steal from the rich to give to the poor. Full walkthrough with screenshots is available in our quests database.

If law and order is all the you are about this is the quest for you. Local head guard wants you to tell the beggars to go do their unsanitary business somewhere else. You just need to run around town to five beggar locations (which you can find in our full walkthrough with screenshots) and talk to them. They will comply without much fuss (but with a lot of whining).

If you feel like you are going to go to a very bad place for chasing the beggars from the streets and hence depriving them of their only means of survival, fear not, this is the quest for you. You visit the 5 people that you may, or may not, have chased away previously and you donate 2 Frostbluff Coins to each of them. You do lose the coins you need for the tokens, but boy do you feel like your karma points went up afterwards. Walkthrough, check, screenshots, check, quests database, check.

Once you complete 30 Winter-home quests every NPC in town is telling you to go talk to Albert Yule. He offers you a choice of two quests. Choosing one will bar you from doing the other quest. Here are the quests:

*HUGE SPOILER ALERT*
You basically can help the poor by finding evidence against the mayor. In turn the mayor will rehire all the workers (the beggars you see on the streets and help during Winter-home quests). The other route is to help the mayor by covering up the evidence and protecting him from the angry workers. Based on your decision you will get different rewards. Helping the workers gives you Shabby Cosmetic gear and title The Blameless, while rich will reward you with Extravagant Festival garments and title Miser.