Captain in the Mines of Moria: The Level 50-60 Guide
by felfalas , arpinduellyer86, Decay

I. Changes to Current Captain Skills

52 - Improved Blade of Elendil: Same as BoE expect it removes a corruption effect on target. The corruption removing is huge when taking on mobs when soloing, but the skill is otherwise the same.

54 - Improved Defensive Strike: Same as DS except it has a chance of restoring some power on a mob under the effect of Light of Elendil. It seems it can restore around 200 power. Not bad, really shines in a group setting when you can proc LoE DoTs often.

58 - Valiant Strike:A melee attack that instant heals nearby fellowship members (and yourself). The healing right now is really weak at something like 170 Morale and the cooldown is 1m. Can become better with trait lines and legacies however.

60 - Shadow's Lament: On-defeat high damage single target skill, and increases threat. I like this skill, it can do some crazy damage. If you trait for it it will do even more. 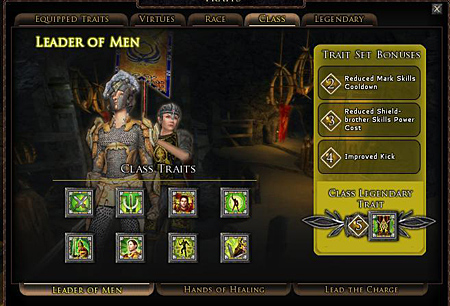 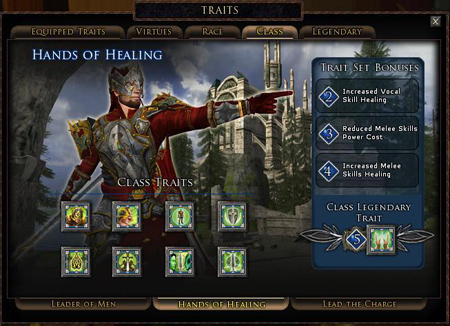 2 - Increase Vocal Skill Healing (+10%)
3 - Reduced Healing Skills Power Cost (-10%) (Note that the description is bugged in the screenshot, it still gives the propper effect however)
4 - Increased Melee Skills Healing (+10%)
5 - Hands of Healing: +10% Healing of all healing skills & -30s cooldown on Valiant Strike, VS has a HoT (Legendary Trait obtained from class quest)

Skills under Hands of Healing Trait Line:
Deeds Before Words - Inspire will restore more Morale (Not sure how much it increases it though)
Relentless Optimism - Critical heals will heal 10% more
Strength from Within - Muster Courage will heal yourself in addition to its other benefits versus fear, but you cannot summon Heralds or Archers. At lvl 60 and without the increase healing trait set, it heals 82 morale initially, and then 82 every 3 seconds for 12 seconds. You can still use Banners.
Fear No Darkness
Strong Voice
Subtle Command
Captain's Hope
Now For Wrath 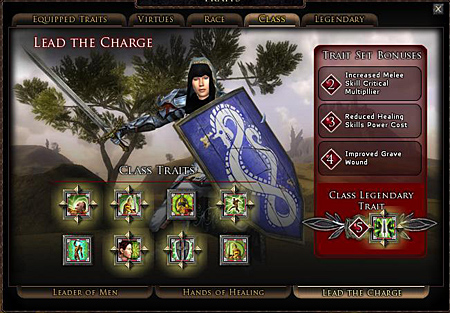 2 - Increased Melee Skill Critical Multiplier (+15%)
3 - Reduced Melee Skills Power Cost (-5%) (Note that the description is bugged in the screenshot, it still gives the propper effect however)
4 - Grave Wound will force your target to attack you for a limited time (IIRC, lasts 10s)
5 - Master of War: +50% Damage and Threat from Shadows Lament, Criticals from Shadow's Lament will put the Captain in Battle-Ready stance, and +50% threat from Noble mark.(Legendary Trait is obtained by completing Books 1-6 of volume 2)

Skills Under Lead the Charge Trait Line:
Adherant of Elendil - BoE will deal 15% more damage
Battle Master - PA and DB deal 10% more damage
Alert Guard - DS increases Parry Chance in addition to increasing Armor. NOTE: This skill was removed from this trait line. I do not have it on either of my Captains (lvl 55 and 60) but some have said they have reacquired it.
Renewed Voice
Turn of the Tide
Focused Strikes
Captain's Valour
Expert Attacks
Intimidation

Our healing is a very nice amount now, and as others have said don't panic when you see our hard numbers and crit %'s, it's not quite as bad as it looks. Overall though, with the legacies, traits, new/old skills our healing has been complimented ranther than hindered. The legendary skill for having 5 in the healing trait line is nice, especially for those who like to be healers (I probably won't have this one slotted often though).

Our dps and off-tanking have really been given much attention, and we can now effectively off-tank at least one mob, if you know your stuff you can probably pull off two. Legacies on weapons/emblems also help this out as well as some of our new traits. Legenadry skill for 5 of the Charge path is very nice (even though they nerfed Valiant Strike by an un-necessary amount, and it was a lot folks), and will definately compliment those who want to dps/off-tank more (I might use this one sometimes).

Our pet/utility path frankly kinda sucks. The Archer Herald is virtually useless. He can't shoot and run, he can only put a self-evasion buff to himself, does "ok" damage, no group buffs, is squishy, and frankly is a pain to use since everyone who has complained about Heralds not keeping up....well, this guy is only going to frustrate you even more. None of our buffs skills (exception of Heralds/Banners) have level'd up past what they are at lvl 50, and I repeat, NONE. So that means our Tactics, IDOME, etc is still all the same. Oh, and our Banners/Heralds buffs do scale up, but is extremely minimal, we saw almost a bif of an increase from lvl 47 to lvl 50. The Legendary trait for having 5 of this line is an Oathbreaker (picture below), but his dps and survivability isn't great enough for me (and probably many of you) to slot 5 traits in this line. He looks cool, but that's about it.... sorry folks.

And for those of you who will still want to go a hybrid path, don't sweat it. You can easily use yoru 3rd Legendary slot for one of our already existing Legendary skills (ex, having IDOME, Oathbreakers Shame, and our bubble all slotted). So you won't be missing out on having a 3rd Legendary, and if you mix and match you can still get trait-line bonuses by having either 2, 3, or even 4 traits in any given line traited. So in a sense, you could be getting the set 2 bonus from each (one line having the set 3 bonus) of all 3 trait-lines all at once. And having bonuses from different trait lines doesn't hinder you at all, so feel free to create hybrid setups.

As a side note, for the new Armour set from the new Raid, which is for defeating the Watcher, it gives off +8 Hope if you have all the pieces. And you MUST have the ENTIRE set to run the raid at all, because without it you'd have so much dread you'd be cowering all the time. This in my opinion kinda sucks because it makes the gear mandatory for the raid, and it makes any other content a bit easier since that +8 Hope buff is a fairly nice buff.