The Warden class represents the brave citizen-soldiers of Middle-earth, the vigilant defenders of the realm patrolling at the edge of the firelight, where civilization meets the Wild. Whether she takes after the Rangers of the North or the infantry of Gondor, the Warden is a quick and cunning skirmisher, shunning heavy and restrictive armor in favor of nimble shields and flexible leathers. Joining spear and javelin with gall and guile, the Warden stands ready to fight the Enemy at home or abroad. 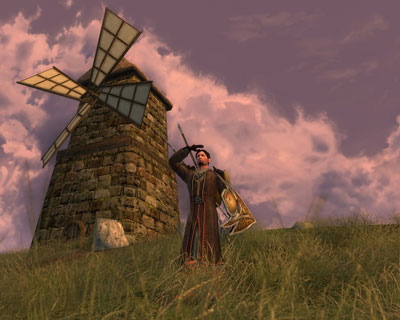 No other class looks quite like the Warden.
His telltale gear includes a spear and javelins across his back and a shield on his arm.

The Warden is a great martial class effective in both close-quarters and ranged combat. Available to Men, Elves, and Hobbits, it offers up a wide array of potent combat options, all controlled using just a handful of core attack skills. It plays fast and is easy to learn, yet it expands steadily, offering up loads of new powers, special effects, and animations over the course of the characterâs advancement. If youâre looking for a Lord of the Rings Online experience that involves more moment-to-moment action and less time spent managing skills, look here. 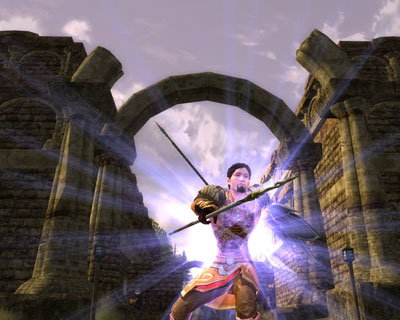 The Warden represents a daring, versatile, and resilient new ally in the war against the Enemy.

If you want a rewarding class thatâs flexible and distinctive, the Warden fits that bill too. One day your Warden might be tanking for a fellowship undertaking epic quests in Moria, and the next she might be a vital ranged-damage-dealer during a battle in Angmar. With its host of unique Gambit effects and animations, the Warden can even be fun to just watch. Whether in a fellowship or going solo, the Warden is a good-looking, well-rounded class thatâs perfect for the player who is willing to risk the sure thing in exchange for a little extra excitement.

From the first moment of play, you can see the Warden is distinctive. The Gambit panelâa special addition to the UI, unique to Warden charactersâoccupies a central place on the screen. This panel tracks your progress as you perform attacks that, in the right sequence, trigger combos called Gambits. Each of the Wardenâs core attack skills adds one of three icons to the panel. Different combinations of icons cause the Warden to perform different Gambits.

In the beginning, the Gambit panel has space for just two icons at a time, making the Warden able to execute two-icon-long Gambits. As the Warden gains levels, the panel expands, and she learns more complex Gambits requiring three, four, or five icons. Every Gambit, thoughâwhether itâs made up of two icons or fiveâis a combination of just three core attacks. These attacks, combined with two other core skills, make up the heart of the Wardenâs combat style.

You read the Gambit panel from left to right. As you add icons to the panel, the rightmost symbolâthe one in the shieldâchanges to reveal the particular Gambit the current icons add up to. When you have the combination of icons you want, just press a single hotkey to trigger whatever Gambit is currently ready in the panel.

Every time you use one of those core attack skills, you build toward a potential Gambit. The question you must always ask yourself while playing the Warden is this: How far do you want to go?

Say your high-level Warden has a Fist and Spear icon already in the panel. Do you add just one more icon to set up your Piercing Strike Gambit (Fist + Spear + Fist) or do you hold out until youâve added three more icons and unleash Exultation of Battle (Fist + Spear + Shield + Fist + Shield)?

Once you trigger a Gambit, the panel is cleared, and you start setting up your next great maneuver.

More Than A Warrior

Though the Warden class is a new addition to the game, its history in Middle-earth is long. Wardens are fully integrated into the game world and can be found everywhere from Bree-land and Rivendell to the shores of Lake Evendim.


The Warden class may be a new addition to the game, but it has been seamlessly slipped into the culture and game world of Middle-earth world to seem as if it has always been a part of the saga. Wherever you goâfrom the charming marches of the Shire to the hills of Evendim and the vales of Eregionâyou find Wardens already in place, their spears at the ready.

With so much of Middle-earth to watch over and safeguard, Wardens must be more than warriors. They must be capable travelers as well. A Warden learns the Forced March skill to increase her run speed so that she can reach besieged folk in times of need. Likewise, a Warden gains swift-travel abilities that carry her to those distant outposts of the Free Peoples where her combat skills are so often in need. Eventually a Warden is able to Muster in EsteldÃ­n, Evendim, Ost Guruth, and Rivendell.

This adds a nice dimension to the classâs personal character. Though the Wardenâs map may lead to a milestone in some home township like Bree, you can expect to find Wardens in many of the remote refuges of the Free Peoples, anywhere brave folk gather amid hidden ruins and secret retreats to oppose the Enemy.

The Role of the Warden

Able to both take and deal considerable damage, the Warden makes a great solo class. These qualities also make the Warden an invaluable comrade in a fellowship. The trick is to know just what kind of support the particular fellowship needs, and then to provide that.

Your choices during play determine how your Warden excels in any given battle. Those favorite Gambits that you know by heart are as important to your Wardenâs individual effectiveness as how you spec your Traits or what you equip. By employing the right Gambit at the right moment, a Warden can heal herself and keep right on tanking or drawing threats away from ailing allies. The Wardenâs self-reliance may be her greatest asset to a fellowship. 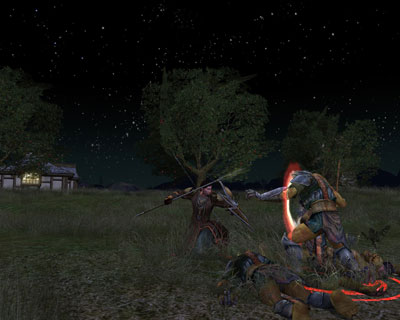 It is a Wardenâs mission to defend the lands of the Free Peoples, whether the battle must be fought in the far-off wilderness or in fields closer to home.
Â

The Wardenâs ranged-combat options also make her a great choice for a first-strike combatant. With the stealth granted by the Careful Step skill and the brutal stun-and-slow effects of the Ambush skill, a Warden can sneak up on an elite foe and prime it for a rapid defeat at the hands of the fellowship. Then you can decide if you want to stay back and employ your withering javelin strikes from a distance or get in close and finish your foe with a bold Gambit.

Mastering the Warden requires experience with its dynamic and patterns of play. The single best way to hone your expertise with the class is, naturally, to play one for a few levels and spend some time trying out the available Gambits.
To give you an edge on your road to mastery, here are a few tips to keep in mind when playing the Warden: 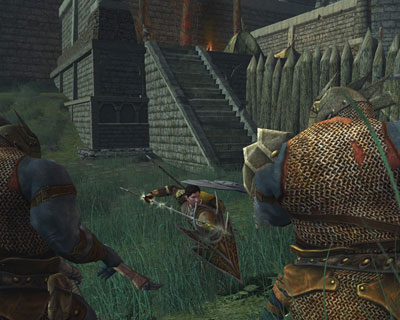 A wise Warden is cautious when outnumbered. More enemies mean a greater chance that a carefully planned sequence of strikes may be interrupted. Use shorter Gambits if need be.

Follow these tips, and you will master the Warden in no time. With a bit of dedication, you can then fulfill your fate and become the one of the greatest protectors of Middle-earth!

One Response to Warden Mastery