One of the unexpected consequences of changing your mounts from items to skills was the following bug that was discovered by our Beta Testers: In Mounts 1.0, you could use any of your mount items (or shortcuts to them) to dismount, no matter which one you are actually on. For example, you might be riding a goat, but you could use your quickslotted horse and youâll dismount the goat.

One of the things that players have done with this is to assign a shortcut to a quickslotted mount and then consistently use that shortcut to dismount. For example, they might assign the middle mouse button to this action.

With Mounts 2.0, instead of items, you have toggle skills, and in order to toggle the skill off (dismount), you have to use exactly the skill that you used to mount up.

While thinking about how to give players a way to still have a dismount command, we came up with the following idea: Why not make a âDismountâ action that you can explicitly bind a keyboard shortcut to in the Options panel.

This was not very hard to do - but it started us thinking: wouldnât it be awesome if this shortcut would do something useful if you werenât already mounted, like for example mount you up :). The only problem: which of your mounts should be used to mount up?

In an ideal world, I can imagine lots of different things it could do - ranging from the ability to pick your favorite horse, to maybe a set of favorites that the game would pick between randomly. However, any of the heavier options could not possibly be implemented this late in the development cycle for Mounts 2.0. So, we went with simply mounting on the last-used mount. 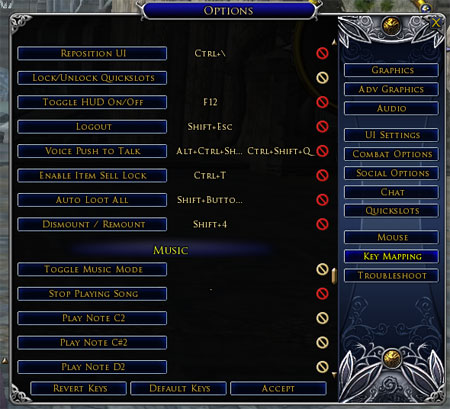 Iâm very happy with this, because it will mean that I will no longer have to have any quickslots taken up with my mounts - if I want to switch mounts, Iâll open up my Mounts panel, and mount up straight from there. From then on, I can keep using my keyboard shortcut to dismount/remount as needed.