Every outpost of civilization in Middle-earth contains those individuals who see it as their duty to protect hearth and home from the ravages of the Wild. These Wardens patrol the borders of civilized lands, preventing the encroachment of fell creatures in these troubled times.

Anticipating the class role, the visual style fell into place first. Spears are one of the most distinctive weapons in LOTRO but they are not heavily used by most players. A class specializing in spears would clearly stand out from other melee classes. Along with the shield that would be needed for extended tanking duty, we had the core elements of our base look and feel. The choice of medium armour further distinguishes the class and also pleases my co-designer, who has spent way too much time watching the movies Troy and 300. 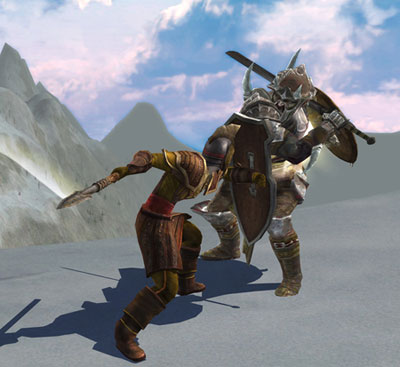 As we progressed with the design, our first assumption was that the Warden would use a bow for ranged fighting just like the other tanking classes. The class focus on spears led us to javelins instead. This choice allowed us to more clearly separate the Warden from Hunters and other ranged combatants. And with that the last element of the Warden look was in place. We now had a class that was visually distinct in all combat roles and easily recognized across the fields of battle.

The hardest part of designing a new class was next: âWhat does a Warden actually do?â The first step was to create a gameplay element that would make Wardens unique. In this vein, most of LOTROâs classes have a signature mechanic that differentiates them from the others: Champions and Hunters have pips, Guardians have reactive skill chains, Minstrels have their ballad tiers, etc. In designing the Warden, the combo mechanic emerged very early in the process. My vision was that the Warden would have a set of simple skills that when activated in a certain sequence would allow the use of more powerful skills. We refer to these as Gambits.

The next problem was how to make a medium armour wearing class capable of functioning as an effective tank. There are a limited number of ways that tanks deal with incoming damage - they can reduce it, avoid it, have huge hit points to absorb it, or have some way to heal it. Damage reduction wasnât available with medium armour. Avoidance was possible, but all classes use the standard block/parry/evade - something different was needed. Having huge piles of morale was also possible but path was rife with potential balance issues. Closing off those avenues of design left the class with the necessity of having some method of healing the damage. This healing ability could not come at the expense of other classes, such as the Minstrel or Captain, but needed to be effective and useful.

As the design progressed, I delved into the lore of the class and the base mechanics of the game itself to arrive at a solution: Wardens are dedicated to the defense of those that can not defend themselves. This gives them a powerful motivation to simply refuse to be defeated. Combined with the implications of the existing morale system, the Wardenâs determination to succeed is easily translated to gaining extra morale over time. This also suggested a corollary mechanic. Given the Wardenâs moral ascendancy over the forces of evil, it would make sense for the Wardenâs opponents to lose morale over time from being in the presence of such a valorous fighter. All of these considerations and more were taken into account as we created the Wardenâs Gambit abilities.

Wardens execute Gambits by coordinating a sequence of gambit icons in a new game UI element called the Gambit display. The Warden has three basic skills that may each add a gambit icon to the display.

Gambits themselves are organized into three broad categories that correspond back to the three gambit icons. The first icon in each Gambitâs activation sequence indicates that Gambitâs category. Wardens initially start with only two boxes in the Gambit display but as the Warden levels, a third, fourth, and fifth box are added. This progression allows more complex and powerful Gambits to be performed as the player masters previous skills and advances.

Spear gambits have a red Spear icon first in their sequences. These gambits all deal with physical attacks and are similar to the attack skills of other melee classes. Shield gambits use the green shield icon first in their sequences. These gambits add short term defensive buffs to the Warden and add heal over time effects. Fist gambits start with the yellow Fist icon. All of these gambits have additional threat while some of them also deal out damage-over-time effects.

Another attribute I wanted for Wardens was meaningful, yet not overly powerful, ranged damage ability. While Wardens are unable to come anywhere near the ranged damage of a Hunter, they are much better at ranged combat than both the Guardian and the Champion. While ranged combat is not the primary class role, one of the Wardenâs signature skills is a ranged javelin ability we call Ambush. This is an out of combat ranged skill that does excellent damage and more importantly knocks down the target for a short time. This opens up the Wardenâs Critical Strike skill that can only target knocked down and dazed opponents. Both Ambush and Critical strike have significant critical hit chances and damage multipliers.

The Wardenâs already capable skill arsenal also includes a variety of utility skills, many focused on travel. Like most of the Wardenâs skills these abilities can only be used on the Warden, but they do allow faster running at a significant power cost as well as instant travel to various outposts in need of defenders. The Warden also has a short term stealth skill to make it easier to execute Ambushes under certain circumstances.

Wardens can use one-handed weapons of any type, but they gain significant bonuses for using spears. They also have bonuses for swords and clubs, though they are not as great as the spear bonuses. Javelins are the only ranged weapon for a Warden. As mentioned previously, the class is limited to medium armour. Characters may use Shields - including a new Warden-only shield type with additional defensive properties. Heavy shields are not usable by Wardens.

As we get closer to releasing The Lord of the Ringsâ¢: Mines of Moriaâ¢ later this fall, we will be telling you a lot more about the Warden (and our other new class, the Rune-keeper). Hopefully this Dev Diary has given you some insight into the design process that created the Warden, as well as a basic idea of what this new class is all about. So far itâs been a really fun class to play and I canât wait to hear what all of you think about the Warden!