The Future of the System

Looking at the combat system as it has grown over the last year, the Systems team has learned a lot from player behaviors, playstyles, and how they interact with all the different types of monsters in The Lord of the Rings Online.

Our data has shown that on the whole, the core player base interacts with our system in expected ways. Heroes of Middle-earth large and small are winning the war in Eriador against the servants of the Witch-king of Angmar.

When the game began, we aimed at making it as understandable as possible to the average player. One thing that meant was trying to keep the numbers as simple as possible. Nothing is simpler then percentages: if you have 100% of a pie and you eat 50%, you are left with half, right? Itâs easy to understand. Well, the funny thing about trading simplicity for extensibility is that it becomes a tricky thing to navigate in a successful MMO. Why is it tricky? Weâll get to that later on in the article.

So how do you create a system that is easy to understand, but flexible enough to support long-term advancement? For Mines of Moriaâ¢, ultimately, we chose a hybrid system of scaling ratings. These ratings, which are nice, whole numbers, now apply to your avoidance chances, resistances, and mitigations. As you go through the system, youâll find more and more equipment that will enable your characterâs rating to increase; the higher the rating, the better the adjustment to your character. Why is it a hybrid system? Ultimately, you can still reveal the percentages (based on characters level) by just mousing over the rating level on your character panel. This way, players can still view their characterâs effective avoidances, mitigations, and resistances in the percentages theyâve been accustomed to.

So why did we change it? It was frustrating for people to not be able to aspire to truly epic gear, since we had to account for flat percentages everywhere you went. We were literally giving out tiny bits of effectiveness for our characters, and generally, although some may disagree, tiny fractional percentages just arenât fun.

Remember, the tricky part about percentages and a successful MMO? You canât give out more than 100%!

When you budget out these values over 10+ years (remember, weâre not just talking about Moria here; but future expansions and beyond!), you either start giving out tiny fractions of a percentage that donât feel very meaningful, or eventually players over a ten year play cycle will reach 100% of those values.

The rating system allows us to give out âmoments of advancementâ more often and in greater magnitude that remain relative for the lifetime of the character.

You can continue to garner ratings for the lifetime of your character, and the more rating points you get, the higher the level of content you can challenge.

Previously, the system was heavily reliant on comparing the monsterâs level and the playerâs level for adjusting the difficulty for fighting more powerful creatures. Although there is still some of that involved, many of these checks have been reduced to ratings checks. So if you find yourself with more powerful gear, you can overcome some of the previously level-dependant mitigation and resist penalties you faced before. This enables truly daring players to reduce the penalties for fighting up-level.

The following abilities have been changed over to be ratings: Parry, Block, Evade, Resistances, , and Critical Chances and Mitigations.

Parry, Block, and Evade all have the ability to âoverchargeâ their points in order to gain all new partial avoidances. In the previous system we had a diminishing returns effect on many of our attribute contributions, rather then having a hard cap. The feedback on the diminishing returns was very opaque. This made it very unclear to many of our casual players.

The introduction of partial events allows us to introduce a less confusing way of showing that effect. These partial avoidances then reduce damage by a partial avoidance percentage. This percentage is also influenced by your Block, Parry, and Evade Ratings. The higher the rating you have in a given avoidance, the more frequently youâll partially avoid and partially mitigate damage. (Your mitigation does stack with the appropriate Defence Rating) These partial mitigations also enable the appropriate combat events that go with them. 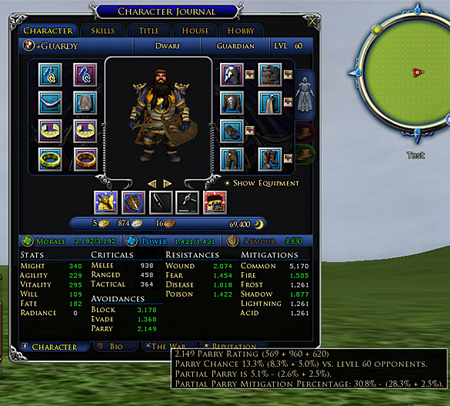 Critical Chances for Tactical, Ranged, and Melee now have a new Devastate chance to do even more damage to the enemies of the Free Peoples then a normal critical. Increasing your chance to Devastate happens just by naturally increasing your Tactical, Ranged, and Melee Ratings. Characters with high critical rating will begin to see more and more Devastate events, which deliver extra damage to your enemies in addition to enabling any critical response skills you might have.

Defence Ratings (Mitigations) are heavily influenced by your Armour values. In Moria, armour now contributes to non-common mitigations, like Shadow and Fire. This means that every character who absorbs damage will care about gaining the highest amount of armour they can find, since it will contribute to all of your Defence Ratings .

How can you find out all this information? Weâve improved our tool-tips in Moria, as well as the combat system. All you need to do is to mouse over the appropriate rating to see everything broken down to on-level percentages.

Whatâs great about the new tool-tips is that they also better reflect contributions, enabling players to tell when they are gaining bonuses from normal stats or are being enhanced by armour and equipment, so you can tell how your character has arrived at these ratings. With these tool-tips the extreme left contribution is from your native state (like your character attributes) and the rightmost is from items and buffs.

All in all, this change in the system is right for the long-term health of the game and its community. The feedback weâve garnered from the last year has really pointed at a need for this. Like every new system it will take some time to get used to, but youâll quickly find that with some adaptation in gear and play-style, your hero of Middle-earth will again be challenging the mightiest of Sauronâs forces!