The main idea
of this guide is to introduce players with some of the new things from the latest update. In fact, one of the challenges you as a player must face will be proving to the Galadhrim that you yourself are not a danger to the Golden Wood.

The Trust of the Galadhrim

How then can you gain safe passage beneath the leaves of LothlÃ³rien?Â  There are several ways you can prove yourself to the Elves and gain limited access to LÃ³rien.

Located west of LothlÃ³rien, the camp of Echad Andestel in Nanduhirion is home to merchants and wanderers on this side of the mountains. Several Elves are visiting the camp for the moment. Each of them can be persuaded to trust you if you aid them with their concerns. As the threat of the Orcs grows you will be able to continue aiding them with their efforts.

South of Echad Andestel, the Elf Haldir maintains his vigil atop a flet, or platform, among the trees. Among his allies there are Hadroneth, who wishes for you to discourage the Orcs from establishing more outposts in Nanduhirion, the Dimrill Dale, and Maethoron. Aiding the Elves in these matters and others will encourage them to give you their trust.

There is one more method of gaining enough trust to be allowed beyond the borders of LothlÃ³rien, and you may have already done it. If you have personally aided the Lady Galadriel over the course of Book 6: The Shadowy Abyss and have gazed into the Mirror of Galadriel at the end of Chapter 9, you will be trusted enough by the Elves of LÃ³rien to enter the woods.

Once you have earned the trust of the Elves through a combination of these methods, and speak with a Galadhrim Lookout just outside the border, he will notify the hidden archers that you are friendly and you will be permitted inside the Golden Wood.

The attack of the Orcs cannot now be forestalled; it can only be met, and it must be hoped that the preparations for the defence are sufficient.Â  When the Orcs begin their attack, the Elves will call upon a trusted few to assist them in the Battle of LÃ³rien, a six-man instance that brings with it some interesting new features: the ability to command NPCs, a Deed that tracks the number of times you have successfully won the Battle, and a set of optional challenge quests that unlock as your skill in the Battle instance increases.

Commanding NPCs â At the outset of the Battle, youâll have an opportunity to assess the strength of the defenders at three defensive points and make decisions about where to send your most skilled NPCs in three categories: healing arts, melee combat, and ranged combat.Â  Do you send them to the same point, and concentrate your Fellowship on the defence of the two other points, or do you spread them out among the points?

Completion Deed â The Deed that tracks the number of times you have completed The Battle of LÃ³rien will award you titles at each plateau, and also unlock optional objectives to complete within the instance that provide you with greater reward.

Optional Battle Objectives â There are several different objectives that can be pursued within the Battle of LÃ³rien that range from defeating optional bosses before they leave the battlefield to preventing certain Elves from taking too much damage, and more.Â  There is also a Legendary Challenge to be undertaken that combines all of the optional objectives into one extremely difficult quest; it will take a lot of skill and precision to pull this one off! 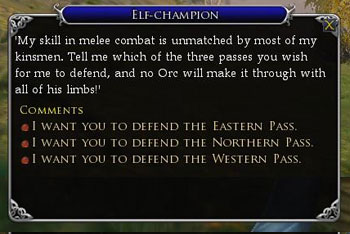 Sentinel's Challenge 1
'Two fearsome foes were seen lurking in the back ranks during the last battle: Narshpug, a foul-tempered Uruk, and GrakÃ¢mÃ¢b, a mighty troll. They were not brought to the front of the battle, which makes me think they are being saved for some purpose; at some point they left the field of battle. If you are able to defeat one of them before they leave and are also able to successfully win the battle, you will have completed my challenge to you.'

For the basic fight and Challenge I, you should sent one NPC to each barricade, trying to balance the forces. This is not required, though. You could, for instance, send the Champ and/or Bow-master to the same barricade as Belvagor. Supposing you sent them all to the same place, it would probably help him avoid damage. This would make the fights a bit tougher at the other barricades, but you will not had a problem with two back (LM + healer or LM + tank).

Certain barterable items (e.g. Armor plating, Bandages, etc) would help Belvegor keep himself alive, and the other items would help his friends burn the attackers faster.

Sentinel's Challenge 2
'My sister Limhendeth has always been fond of Belvagor and expressed to me her concern that he might be wounded during the upcoming battles with the Orcs. My challenge to you is this: do not allow Belvagor to be so much as scratched. He is an Elf brave and true and will demand to fight at one of the passes, but for my sister's sake, ensure that he is not wounded. You must win the battle without Belvagor sustaining any serious injury to complete my challenge.'

Sentinel's Challenge 3
'We need to send a message to the Orcs, (your name). We must show them that they are no match for the defenders of LothlÃ³rien, and what better way to show them this than to repel them with all haste?

'If you are able to successfully win the battle in less than thirty minutes, you will have completed my challenge.'

'During the next battle, you must defeat both Narshpug and GrakÃ¢mÃ¢b before they leave the field of battle, you must prevent Belvagor from taking any wounds, and you must successfully win the battle...all within half an hour.'