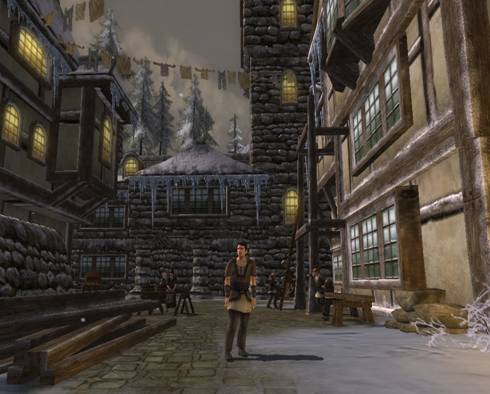 Today Lauren 'Budgeford' Salk has released new developer diary about upcoming Yule Festival which will give you a chance to choose your own experience and define the type of role your character is playing. This year, Yule Festival will be starting on December 14th.

This festival looks different, feels different, and is different. It is not the usual event-in-a-box that we have been making again and again since my first festival, in which we introduced the Hedge Maze. This one is bigger, more immersive, and doesn’t just layer more content on top of the existing festival areas. It features a number of quests, a story, a moral choice at the end, and several mini-games all contained in a new wintry region.

So what we can expect to see in Winter-home:

The Snowball Fight came first. It was simple, and I thought it would be a fun diversion. It will serve as a way to fill up this big region and give players a reason to hang around when they were done with their daily quests. It is an alternate way to acquire barter tokens and ramp up deeds in Frostbluff.

It did come with a few logistical problems. When we were implementing the event, the snowball fight was impossible to test beyond ensuring that the skills worked. On our own computers we can generally only dual-client, so in a competitive game it is very difficult to gauge how something should be balanced. It was our QA team that saved the day here, along with wonderful feedback from Beta. Our QA testers did a wonderful job of making sure this event got plenty of attention so that it could be polished before release.

The Eating Contest came after I had a sudden panic and believed that a Snowball Fight, a Theatre Event, and a handful of standard quests wouldn’t be enough to make this area feel like a festival. At this point my workload was making me swiftly lose my sanity. The Eating Contest was created in the same vein as Ale Association and Inn League quests.

You will first be introduced to the town by Albert Yule, a helpful Town Crier in Winter-home. He plays the role of the narrator.

The mayor and his wife are the unfriendly people in town. They care only about their profit and the comfort of the patrons. Comfortable patrons, in their eyes, will surely give them more money.

The town’s Watchman is not a bad fellow, but he is a stickler for the mayor’s rules. He enforces the law, and his day’s work often involves some very unsympathetic tasks.

And everyone knows there can be no festival without hard workers to remember all the chores there are to do.

Then there are the good guys. There are many hardships for them to overcome, but such is the way with good guys.

This entry was posted in Dev Diary and tagged Dev Diary, Yule Festival. Bookmark the permalink.